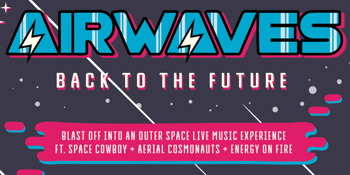 NightQuarter - Sunshine Coast (Birtinya, QLD)
Saturday, 27 March 2021 2:00 pm
23 days away
All Ages (minors must be accompanied by Guardian)
Australian Artists
Rock
POP
Dance
Send this event to
MOVE OVER NASA AND SPACE X!
COVID HALTED THEIR JANUARY BLAST-OFF!
NOW LAUNCHING AS A ONE DAY OUT OF THIS WORLD ESCAPE ON 27 MARCH!

Space Cowboy will light up the launch pad alongside Sneaky Sound System, The Beautiful Girls, Ash Grunwald, Paces and more at Airwaves Festival – Back to the Future, set to blast off at the Sunshine Coast’s newly opened NightQuarter!

Keeping to the festival brand of outer space themes, organisers have put together a line up that will have you star-gazing and catching your breath.

Australian folk acoustic kings, The Beautiful Girls will be landing fresh from their 'Seaside Highlife Greatest Hits Tour' and Ash Grunwald is itching to hit the deck to bust out his 'Delta Swamp' blues.

If paradise has a soundtrack, Paces is curating it and he'll be pouring out his creative energy alongside Sunny Coast alternative roots outfit, Flaskas, Gold Coast eclectic, psych-infused alternative rockers, Peach Fur and all-female surf psych quartet, The Oogars.

To up the ante and add to the history books, Aerial Cosmonauts and Energy on Fire are also thrown in the mix and a million volts of electricity will be surging through Space Cowboy’s body in his history making high voltage act.

The festival presented by Hot 91 blasts off at 3pm.  Tickets include entry into Nightquarter and the post festival kick-on at Malt Shovel Taphouse, featuring internationally renowned DJ, Niki de Saint.  Spaces on the shuttle deck are extremely limited and on sale now at the discounted second release price of $79 + BF.