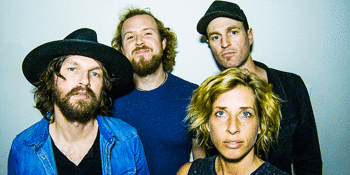 The series is being supported by Arts Queensland’s Play Local funding, which has also contributed to the booking of 40 Sunshine Coast based acts across the five stages of NightQuarter.

Winners of Best Live Act at the 2020 Gold Coast Music Awards, Tijuana Cartel have established themselves on the Australian music scene as one of the country's most exciting live acts, combining the sounds of the Middle East, India and Spain with a psychedelic and atmospheric approach to song writing. Based in deep electronic roots with a concoction of multi-layered grooves, splashes of Middle Eastern vocals, lilting Mobyesque soundscapes, Flamenco and slide guitar, trumpet, live & electronic world beats and percussion, influenced heavily by break beats.

The four-piece formed on the Gold Coast in the 1990s and have since built a firm reputation as a global force, notching up residencies in Mumbai, Thailand, Bali’s KuDeTa Bar and Beijing’s famous Loong Bar during the 2008 Olympic Games. The band has also been a familiar face on the international festival circuit, playing stages across Europe and the USA as well as Australia's most loved events including Peats Ridge, Rainbow Serpent, Wave Rock, Splendour In The Grass, Byron Bay Bluesfest, Woodford, Falls Festival and many more.

“We blend all our personal influences together into our own sound, I'm into flamenco guitar and world sounds, whereas Carey is more into breakbeat and electro styles, Eamon has a jazz background and Sheila brings her DJ alter ego into the mix.” Paul George (Tijuana Cartel frontman) Creating an electronic beats tapestry that will cut through to your very soul, Tijuana Cartel is the perfect accompaniment to the rich tapestry of offerings at any festival across the globe.

“There's really no one else doing their mix of eastern mysticism, world flavours and cutting-edge dance beats, certainly with as much flair.” Andrew Drever (Sydney Morning Herald)