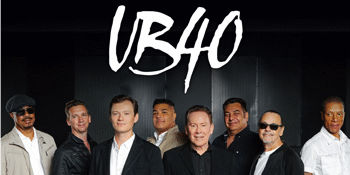 UB40 '40th Anniversary For The Many Tour'

The UK’s most successful reggae band, UB40 have announced that, due to travel restrictions and for the safety of fans, band members, and their crew, their eagerly anticipated return to Australia will be postponed until March 2022.

Originally set to tour Australia in October 2020 as part of their 40th anniversary, and to perform hits from their latest release ‘For The Many’, it is with regret that UB40’s Australian tour now joins a growing list of international acts that have been forced to reshuffle tour plans.

Despite the many unknowns in international touring, UB40 are staying optimistic, and have locked in fresh new dates for their return to Australian shores.

“We always look forward to trips down under, but we know it’s only a temporary delay, we will be back. Said the band in a statement today “The most important thing is that we all stay safe and we’ll see you on the other side of this ordeal.”

For those that have managed to score passes to the band’s Australian tour, tickets will still remain valid for all upcoming shows. Australian tour promoters MJR Presents have encouraged all ticket holders to hang on to their tickets, in order to continue supporting the live music industry.

“We strongly encourage all ticket holders to hang on to their tickets, not just to this show, but to all upcoming tours they’ve had their hearts set on” said MJR Presents director Scott Mesiti “Keep them on your fridge, or your calendar or your desk as a simple reminder that we’ll get through this, and when we come out the other side, there’s going to be some amazing live music waiting for us.”

Having previously sold out their 2015, 2017, and 2018 tours, the band return to Australia with plans to perform previously uncharted territory; hitting Sunshine Coast and The Gold Coast for the first time, as well as return performances in Brisbane, Sydney, Melbourne, and Perth

The ‘40th Anniversary For The Many Tour’ will offer audiences a taste of classic hits like ‘Red Red Wine’, ‘I Got You Babe’ and ‘Can’t Help falling In Love With You’, as well as tracks from the latest release ‘For The Many’ which will be performed live in Australia for the first time.

One of the UK biggest exports UB40 have achieved over forty top 40 hits in their native Britain with international sales of over 100 million records, the band are one of the biggest UK music acts of all time, and continue to record charting albums while touring across the world including regular trips to Australia where they have firmly found a place in the hearts of fans.

After four decades of success including their hit singles, international stadium tours, and festival headline slots the band continues with their key founding members and songwriting core, staying true to and building on the legacy and ethos of the band.

All ticketholders must comply with Government COVID-19 requirements in place at the time of the show. Unless required by law, refunds will not be available for failure to comply.